In the Shahjahanabadi old city of Delhi, between the Jama Masjid and the Red Fort, both monuments reminding of the Mughal pristine glory, a green and glossy patch covers an area where once stood the houses of the Muslim nobility. They were leveled after the Indian revolt against the British in 1857. 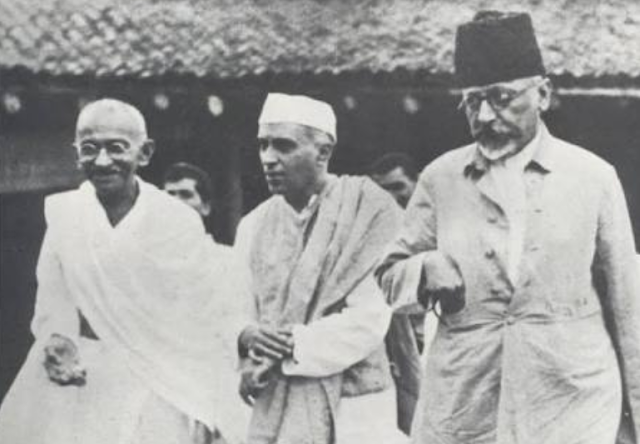 Maulana Azad was not only this century’s most articulate votary of Hindu-Muslim unity but also the only one erudite aalim (Islamic scholar) who claimed Quranic sanction for his faith in that unity and the freedom of the nation.

Near the mosque, and above the level of the crowded new bazaar, a red sandstone wall encloses a garden in which a tomb of simple dignity marks the resting place of the man born in Mecca on November 11, 1888 and who died in New Delhi on February 22, 1958 — Mohiuddin Ahmed, better known as Maulana Abul Kalam Azad.

The location is appropriate, a grave amidst the relics of past history, in a domain wrested by the British from the Mughals, and then freed again at great cost. The other leading figures of the great freedom struggle, Mahatama Gandhi and Pandit Nehru, were cremated not far away, along the banks of the river Jamuna, beyond the battlements of the Red Fort. But Azad, in death as in life, is alone.

Maulana Abul Kalam Azad is, by any reckoning, a major figure in twentieth-century Indian history. He was a scholar thoroughly trained in the traditional Islamic sciences, with great intellectual abilities and eloquence of pen and speech. He had, in addition, a remarkable openness to modern western knowledge even as he opposed the western rule over India.

Azad made a lasting contribution to Urdu prose literature with his translation and interpretation of the Qur’an — Tarjuman-ul-Quran. The intellectual history of Islam in India has long been described in terms of two contrasting currents: the one tending towards confrontation, the other towards assimilation, with the Hindu milieu.
This dichotomy is, of course, an oversimplification, for separatist and syncretist represent extreme points on a spectrum of possible intellectual responses by Muslims to the Indian scene.

In his youth, Azad had been totally inexperienced in politics. Now with a full knowledge of what was involved, he had proved that his religious faith could guide him in the area of general principles, and give him strength for the difficulties he had to face.

Maulana Azad earned a reputation for ‘absolute impartiality’ and ‘unimpeachable integrity’ which served him well, particularly in the years after independence.

The major concern of Azad’s life was the revival and reform of the Indian Muslims in all spheres of life, and his political hopes for them were within this context.

For any such reform, he realised the key position of the ulema and of the traditional educational system which produces them. This was why he pinned his early hopes on the Nadwat ul-Ulema under the leadership of Shibli. Such was Azad’s vision concerning matters internal to the Muslim community.

As far as relations with others were concerned, we have seen that Azad never questioned the fact that being Muslim in India meant living with non-Muslims in common citizenship.

He had never contemplated any other political possibility, and when incidents of communal strife in the 1920s threatened Hindu-Muslim unity, and then in the 1930s and 40s the Pakistan movement gathered strength, his spirit rebelled against those trends.

In his presidential address to the Congress in 1923, he said that the ability of Hindus and Muslims “to live together was essential to primary principles of humanity within ourselves.”

Almost twenty years later, when he again addressed Congress from the presidential chair, he repeated this absolutely fundamental premise: “I am a Muslim and profoundly conscious of that fact that I have inherited Islam’s glorious tradition of the last thirteen hundred years.

I am not prepared to lose even a small part of that legacy. The history and teachings of Islam, its art and letters, its cultural and civilization are part of my wealth and it is my duty to cherish and guard them… But, with all these feelings, I have another equally deep realisation born out of my life’s experience, which is strengthened and not hindered by the Islamic spirit.

I am equally proud of the fact that I am an Indian, an essential part of the indivisible unity of Indian nationhood, a vital factor in its total makeup, without which this noble edifice will remain incomplete. I can never give up this sincere claim…”
—
*Chancellor, Maulana Azad National Urdu University, Hyderabad, grandnephew of Maulana Azad

Pakistani Politician and ex-cricketer Imran Khan said that India-Pakistan relations have reached to the lowest level so far, while both countries entered celebration of their 70th Anniversary of Independence. He also remarked that Decision of […]

Rivalries Between Different Communities? What Dr. Ambedkar Said!! MUMBI ;No nation can survive long and claim to be a super power if different communities within suspect each other .The  race in social armament between communities […]

Media Empowerment of weaker sections of the Society. We are working 24×7 to make various Digital Media products under the flagship of BhindiBazaar.